Thinking back over my years with Vernon and Famous Old Time Music Company, one of the things I have enjoyed most was hosting the Appalachian Opry at the Wapakoneta facility.  Each concert was introduced with several numbers by the Opry Band (comprised of Vernon on rhythm guitar, me on fiddle, John Arms on mandolin, Mitch Manns on banjo, Mitch’s son Jesse on snare drum, and an assortment of bass players over the life of the series).  The next segment featured various local artists performing bluegrass and/or old country tunes.  My favorite part of the show, however, was the Opry Comedy Crew.  These comedy skits weren’t necessarily long or complicated but I, for one, thought they were a hoot!  These photos are taken from our  Halloween Opry show.  Obviously the first one is Vernon, featured as a suspender, slouch hat wearing bluegrass boy.  Next is me in my Elton John glasses (and I don’t know whose hat!) as keyboard player with Kermit and the Kroakers.  The monster is… get ready for it… Robert Campbell, our quiet and, we thought, shy banjo player!  And last, but certainly NOT least, is our very own Jenny Lee  as Madame Touche’ singing a VERY sultry version of Five Pounds of Possum!  We had a blast at those shows! 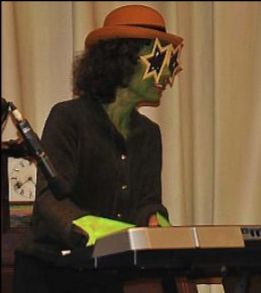 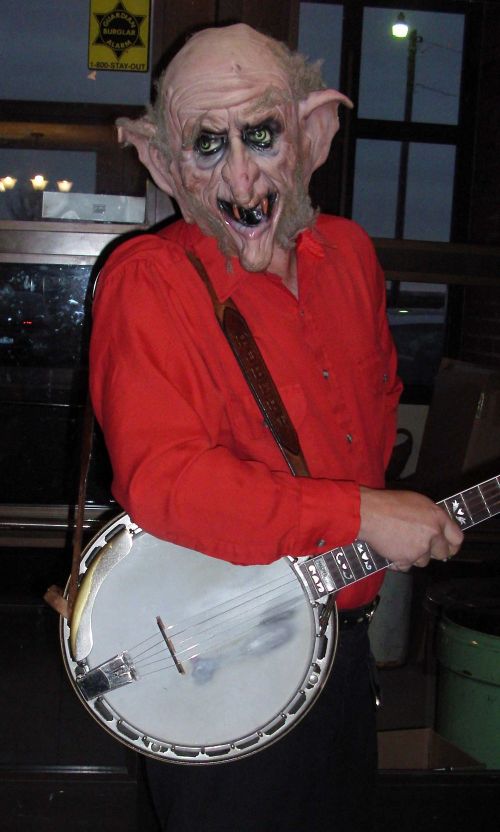 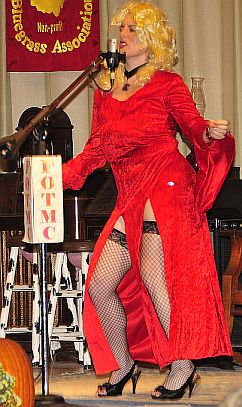